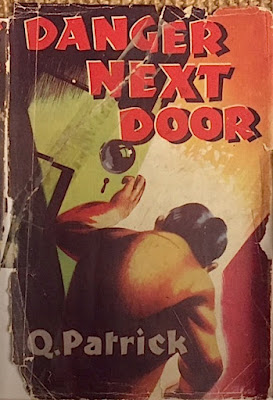 THE STORY: Clark Rodman is fascinated with the apartment across the alley. He watches with curious intensity the occupants and in particular the young woman who lives there. He captivates her. She lives there with two other men, both of whom he knows are photographers employed by a news agency. One of them is her brute of a husband. They seem to know a little too much about Clark, too and let him know when in a chance encounter they attempt to make him the subject of a photo essay. When Clark refuses the attention Gene Folwell, the husband, lets on he is aware of Clark's Peeping Tom act and threatens him if it doesn't stop. Of course this only intensifies Clark's morbid curiosity, firing his imagination that there is Danger Next Door (1951) for Laura Folwell.

THE CHARACTERS: Clark, Laura, Gene and the rest of the cast are stock in trade characters you might encounter in any number of "foolish voyeur" thrillers so familiar to crime fiction fans. Clark is a rich kid who wants a taste of the simple life. He turned down his father's offer to join the family business and instead took off for the big city of Manhattan with dreams of becoming a writer. He uses Laura, the girl next door, as his muse and churns out a sordid tale of an abused young woman suffering in silence as a prisoner of her domineering ape of a husband. This turns out in part to be true, for Gene is a sadistic thug who exploits his wife in a blackmail scheme that relies on using Laura as an inserted model in altered photographs of people caught in nearly pornographic, compromising positions. As the story unfolds the reader knows that Clark will be determined to save Laura at any cost. Murder is not ruled out. Soon his outrage gets the better of him and Gene is killed. The final third of the story tells how Clark, Laura and Gene's brother Harry plan to cover up the crime.

But Ted Steele, Clark's intrusive neighbor, is complicating matters. Ted presents himself as a police officer on the vice squad with his eye on Gene and Harry's blackmail operation. He also seems to know a little too much about Clark. Everyone seems to be watching Clark with the same intensity that he is watching Laura. When Clark tries to verify Ted's identity he finds out that there is no one in the phone book listed as either Ted or Edward Steele. Through his connections with a policeman friend Clark learns there is no one named Edward Steele in the NYC vice squad. Who then is Ted Steele? And why is he so interested in Clark's welfare and the activities of the three people across the alley?

Then there is the mystery of furniture that seems to move by itself in the Folwell apartment. The odd glances Gene makes towards the floor. Was he kicking at an unseen dog? But how can a dog make a sofa glide across the floor? The wallpaper is ripped off and shredded from one of the walls in a room Clark can see from his place.  What might explain that?  Angry fits of temper? A wild animal going crazy? What of the messenger boy Clark enlists to deliver a note to Laura? Why did he return from the Folwell apartment in a terrified state talking of a freakish creature with the face of monster that was hiding behind Laura, clinging to her legs? Is that some kind of apelike pet the Folwell's are keeping in their home?

I liked the irascible forensic pathologist Dr. Talbot Trask who turns out to be one of Clark's few allies and a sort of detective in the final pages. He suffers no fools gladly and can't abide the naivete of the police he must deal with daily. Dr. Trask is interested in a cold case, the unsolved disappearance of Professor Barraclough who apparently was lost at sea. Trask is convinced that Barraclough has been murdered, but without a body he can prove nothing. The professor is an inventor of a photographic method that makes image manipulation very easy, something like a 1950s idea of Photoshop but without the digital aspect. An invention involving photography? Oh yes, you better believe this cold case will figure into the sideline of Gene and Harry Folwell. Trask provides the only bit of humor, albeit a nasty, cynical humor, in a novel that is filled with tension, suspense and few chilling surprises.

INNOVATIONS: More than any other Q. Patrick work Danger Next Door (1951) is a genuine noir novel not much of a detective novel though there are detective story elements. It's also as sordid as the magazine piece that Clark wrote. There is a perverse quality to the plot that recalls the brutality and cruelty of Q. Patrick's The Grindle Nightmare written nearly two decades earlier. I was reminded of the darkest novels of Gil Brewer and the revenge thrillers Lawrence Block wrote in his very early career. Sex and sadism mix together in a tale of twisted blackmailers obsessed with the darkest desires and blackest bedroom fantasies. Elements of the weird menace stories of pulp magazine writers like Anthony Rud, Wyatt Blassingame, and G. T. Fleming Roberts also turn up in one of the more bizarre revelations at the book's midpoint and in the ultimate twist in the final pages.

This might well have been titled Fifty Shades of Ebony. Yet none of the power plays and domination scenes we are shown (thankfully only two) can possibly titillate. It's just violence. Laura's victimization curdles the blood and chills the bone; there isn't a tinge of intended arousal. The reader is longing for Gene to get his comeuppance.

The novel can also be seen as an inverse of the Horatio Alger stories of poor young men who seek success and wealth in city life. Throughout the story everyone who meets Clark tells him that he's in over his head. That his rich kid background is something he can never escape and that he should never have left the comfort of his father's house and the guarantee of an easy life in an inherited position at the family business. Here is a sampling of the many warnings and advice our hero receives:

Gene Folwell: This isn't a healthy neighborhood for millionaires' sons.

Dr. Trask: Don't go poking your nose too far into other people's affairs. [...] Rich men's sons are good targets, too. We don't want to have you on a slab in the next room, you know."

EASY TO FIND? Already discussed in my exuberant post when I first discovered the book offered for sale and my immediate purchase of that rare copy. Read about it here. So the answer (as usual) is no. In this case the book is so uncommon that I'd amend that to a blunt "Absolutely not."
Posted by J F Norris at 7:21 AM