I'll never pass on a Patricia Highsmith movie. This is one that I was completely unfamiliar with. I have read quite a few of her books, and reviewed one on this blog, but not only have I not read The Two Faces of January I hadn't any idea of the basic plot. Nor did I want to know before I saw the movie. From the opening scenes in which Viggo Mortenson and Kirsten Dunst are touring Greek ruins in their elegant attire to the final violent moments I was riveted. It may be one of the few sun-drenched noir movies in existence. Sun and heat and Greek ruins have never been more sinister on film. 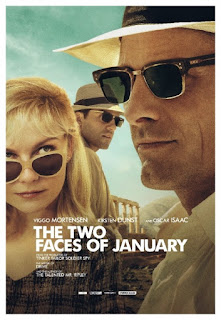 I'm not sure I want to discuss the story at all but I urge any Highsmith fan, whether familiar with the novel or not, to see this movie. Viggo Mortenson and Oscar Isaac are fascinating to watch. Kirsten Dunst also does some interesting work in shading her character but the screen is dominated by the presence of the two men as one might expect in a Highsmith story. All of them are crooks of one sort or another. Each of the three leads is corrupt and a master manipulator. Isaac is Rydal a con man of a tour guide exploiting tourists' ignorance of the Greek language and the Greek drachma to his own ends; Mortenson plays Chester the shifty investment banker indulging himself in a life of excess; and Dunst is his wife Colette who hides her fear and hidden desires beneath a veneer of American charm and plastic smiles.

Highsmith's fascination with male bonding, friendship and fraternity is augmented in this story by a very strange surrogate father fixation in the attraction Rydal has for Chester. The catch is Rydal hated his real father who we learn has recently died at the opening of the movie. Yet he cannot help being drawn to Chester who uncannily resembles his dead father. Their initial meeting is all about stares and penetrating gazes and the father/son motif inexorably plays out in a dangerous and ultimately heartbreaking manner. 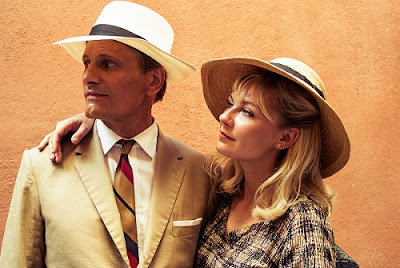 To me the most intriguing aspect of the film are the looks exchanged between characters and their silences. Often what isn't said is more important than what is and carries more weight. So much is conveyed only through glances or stares. It's an interesting choice not often used these days in movies that seem to be talkative monologue marathons. Not to disparage the intelligent dialogue devised by director/screenwriter Amini who also wrote the excellent screen adaptation of James Sallis' novel Drive. He uses dialogue with economy but is more interested in visuals to tell his story. This is a smart movie about smart and wily characters.

By the time the movie was about halfway done I suddenly had to know if it was being faithful to Highsmith's novel. So I went searching online for a book review or a plot summary and found that it was very much true to her novel with only a few minor tweaks. Having watched this cat and mouse game played out in the blazing Greek sun with more than a few references to it rich mythological heritage not the least of which is the eerie reverse Oedipal psyche I am now eager to read the book. I'm curious if Highsmith focusses more on young Rydal and his twisted family life and also if she delved into mythology as much as Amini did.
Posted by J F Norris at 10:56 AM