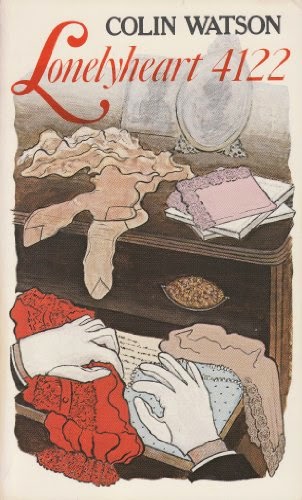 Two plot lines unfold simultaneously in Lonelyheart 4122 (1967), a combination detective novel and sophisticated con artist caper involving a couple of missing women and the dating service they both joined. Inspector Purbright, Sgt Sid Love and the rest of Colin Watson's Flaxborough police are on hand to solve the disappearance and possible murders of the two middle-aged women. But it is Lucilla Teatime who steals the show in the second story that deals with her burgeoning romance with a retired Navy officer. It seems more than likely that Member 4122 of the Handclasp House dating service was responsible for the disappearances. Is Lucy doing some investigating of her own? She certainly seems to have an ulterior motive in seeking out a specific type of man when she too joins Handclasp House.

After reading a series of mediocre detective novels, crime novels that really weren't crime novels for the past three weeks I've finally hit my stride this month with a group of very entertaining books that take basic formulas of the private eye novel (I Found Him Dead), the police procedural (The Late Mrs D), and now the predatory fortune hunter plot and turned them inside out and made them altogether fresh and exciting. Watson's style is a blend of graceful wit, intricate plotting, and all out farce. In Lucilla Teatime he has created one of the most sophisticated badass biddies I've encountered in the genre. She continually surprises the reader with her own devious plans and her impressive knowledge encompassing everything from amateur botany to the mechanics of French sports cars. There are some acutely realized comic scenes that might have been lifted from Fawlty Towers like her surreptitious unearthing of a bunch of primroses just prior to her face to face meeting with Commander Jack Trelawney (Ret.) or her attempt to hire a sporty Renault from a car rental agency. 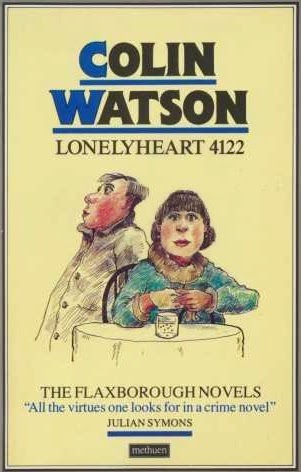 I so enjoyed this book I took not a single note about the plot. Usually I have several pages worth as well as paragraph citations, but there was too much to take in all at once with this book. This time I came out with one Post-It note with two page citations for the scenes I mentioned above. It's best to know as little as possible about this story in order to fully enjoy it. I just went along for the ride enjoying each hair rising turn and sudden jolt along the way. Watson has a talent for making even the simplest of exchanges laugh out loud funny and he does it all with an elegant prose and witty finesse. Most of the fun comes from trying to figure out if Miss Teatime is a rogue like Trelawney or a a true heroine performing the most underhanded form of amateur sleuthing. It's never really clear until the final chapter. And what an ending!

While Purbright and his crew are the primary series characters in Watson's comic crime novels about the bizarre criminal activity that plagues Flaxborough Miss Teatime was such a hit in Lonelyheart 4122 Watson made her a recurring character in later books.  I'm eager to read more of his novels and see what mischief she gets up to in future adventures. This is one of the better examples of a comic crime novel that is consistently funny yet never succumbs to raucous slapstick nonsense. Amid the wit and humor Watson still maintains a good deal of suspense in the deadly serious parts involving an insidious plot. This has been one of my favorite books I've read so far this year.  Go find a copy now!

Reading Challenge updates:  Silver Age card, space I2 - "Number in the book's title"
Book published in 1967 for Rich Westwood's "Year of the Month" reading challenge.
Posted by J F Norris at 8:41 AM