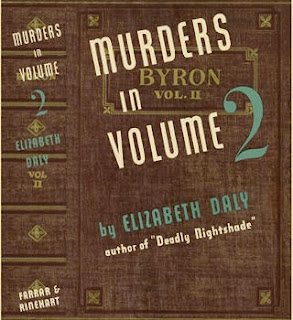 Murders in Volume 2 (1941) was the sole Henry Gamadge book to remain out of print for decades. In the late 1970s when Bantam reprinted Daly's books in order to capitalize on Agatha Christie's admission that Daly was her favorite American mystery writer it once again escaped being reprinted. Not until 1994 did it finally reappear when Otto Penzler inexplicably included it in his Classic American Mystery Library series. I say inexplicably because the books reprinted in this series were marketed as the American versions of the better known "English puzzle mystery." Justly included were books by S.S. Van Dine and Ellery Queen, each of them devilishly constructed murder mysteries requiring intense application of logic to unravel the complicated plots. Daly's book does not compare. In fact, I found absolutely nothing puzzling in the book other than its inclusion in Penzler's reprint series.

The structure of the book led me to believe with all the literary references (Byron, John Webster and Shakespeare) that manuscripts and books would play a big role in the story. Not at all the case. Although the Byron book serves as the springboard for the plot and a duplicate volume eventually turns up they serve only as props. Nothing to do with motive, no codes, no faked pages. Allusions to Webster's play The White Devil crop up repeatedly since one of the characters, a matriarch actress, is planning to raise funds to produce the play in the hopes of reviving her already dead career. All hope of some hair-raising melodrama in light of the violent Jacobean murders in Webster's play evaporate as the story progresses. And the Shakespeare allusions are present as intellectual ornament only.

At the heart of the story is volume 2 from a set of Byron's poetry, a book which may or may not be a forgery. Gamadge is an expert in manuscript and book authentication who has a career in weeding out forgeries and doctored books made to appear antique. Gamadge is asked to investigate the book's odd reappearance.  Odd because in 1840 a governess disappeared from the Vauregard family gardens carrying the Byron book. The book never resurfaced when the governess vanished without a trace. Now she has just as mysteriously reappeared dressed exactly as the day she went missing and carrying the Byron book. It can't possibly be the same woman -- an entire century has passed -- and yet she has the very same book in hand. Or is it a brilliantly constructed fake book?

What a great hook for a story. Sadly little ever develops from that hook. Gamadge practically solves the mystery instantly by dismissing all thoughts of the fantastical. She cannot have time traveled and she is not a ghost. The anecdote of the woman disappearing along with the book is also too private to have become public knowledge and was never publicized so it could not have been learned about in an old newspaper. This leaves only one solution -- that she is a fraud and that someone in the household informed her of the story and got her to play a part. The only real mystery to solve is why the big charade. 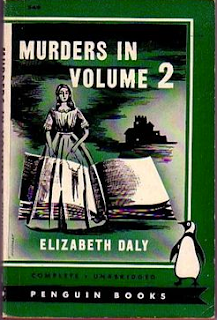 Not even the death of Uncle Imbrie, who owned the book, is that interesting. He is assumed to have died of natural causes. Eventually it is learned poison was administered. Daly isn't concerned with creating mystery as much as she is creating a story populated with eccentric characters and letting them entertain us with talk. There is an excessive amount of superficial dialogue that contributes little to the plot. The pages are filled with theater gossip, discussions of the Webster play, occult and New Age philosophies, chit chat and prattle. The talk is incessant and brings the story to a grinding halt several times.

There is little detection after the business with authenticating the book is dispensed with. The majority of the plot is devoted to revealing the suspects as liars. Gamadge spends much of the time trying to get the woman claiming to be the "ghost from the past" to engage conversations, but she manages to elude him or remain silent. Where's the drama in that? When Gamadge fails he turns his efforts toward unmasking the coach/informer among the family members and meets with more denials and cover-ups. It all gets to be extremely tiresome.

I kept plodding on hoping against hope for some sort of improvement. It was like going on a hike in the mountains and hoping for great vistas when all you end up doing is climbing higher and higher with all views obscured by dense forest. The clearing never comes and the ridge eventually flattens out leading you to a panorama of nothing but leaves and branches.

When I was done the only real mystery that I solved was why the book remained out of print for so long. Mediocrity is undeserving of anyone's attention.
Posted by J F Norris at 11:09 AM