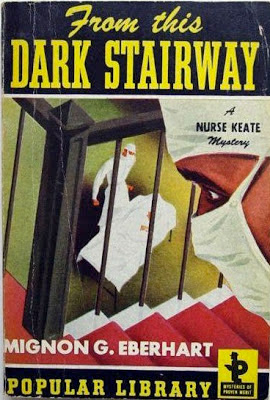 From This Dark Stairway (1931) is Eberhart's fourth book to feature the sleuthing team of Nurse Sarah Keate and policeman Lance O'Leary. It follows her bravura locked room detective novel The Mystery of Hunting's End and nearly surpasses that book with yet another impossible crime. A physician enters an elevator with his patient on a hospital gurney headed for an operating theater. The elevator seems to malfunction or stall. When the elevator opens the physician is dead and patient and gurney are gone. But no one saw anyone get off or on at any of the other floors. The only explanation seems to be that patient killed doctor and fled. But how did he get away without anyone seeing him leave the elevator?

As is usual with Eberhart she sets the scene with a moody descriptive section that gives us a perfect rendition of the creepy stairway that the hospital employees are forced to use due to the mechanical problems of the only elevator that serves the four floors of Melady Memorial Hospital.  Sarah Keate tells us out of expediency she finds the stairway a better option even if it is dimly lit and rickety and spooky. There is a fair amount of HIBK type of narration in the opening chapters but this soon gives way to a tale of a motley group of nurses, doctors and eccentric patients all of whom become suspects in the murder of Dr. Harrigan.

There are cleverly placed clues, a few red herrings (remember them?), and an impressive show of misdirection especially in the final chapter. In addition to the puzzling and nearly impossible murder and disappearance in the elevator there is also the theft of an antique Chinese snuff bottle, the desire to find the formula for a new anesthetic drug called Slaepan, a missing surgical knife, the discovery of chewing gum on the doctor's body, and perhaps most significant of all the death of an unnamed Negro patient. In fact, in the penultimate chapter Lance tells Sarah that if the Negro patient had not died on that very night there would have been no murder.

I have read other reviews and criticism of the Sarah Keate novels which all seem to play up the HIBK elements and dismiss the detective novel portions as being middling to absent. Not so here. Keate does real detection even if much of it comes by accidental discoveries and coincidence. She seems to be present more often than is necessary during police interviews. Eberhart, however, gets away with this by making nearly all of the patients hysterics and oddballs who require a nurse present (at least according to head physician Dr. Kunce) so that the interrogation does not overly upset them. 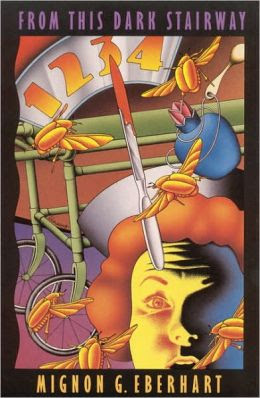 I liked Eberhart's use of humor in this book, too. Sarah can often come across as a stuffy, old-fashioned spinster with Edwardian views about everyone's behavior, but here she shows off a modern self-effacement. There is a running gag about the mispronunciation of Dr. Kunce's name that wears thin by the midpoint of the book, but other nice touches include some digs at Sarah's spinsterhood, specifically her lack of sex appeal that she sarcastically acknowledges in her reporting of Sgt. Lamb's veiled insults.

Eberhart was known to me primarily as a suspense novelist and this is my first encounter with one of her true detective novels. She does an admirable job here. The characters are lively and strange. The action is well paced, the atmosphere grows increasingly eerie as the story approaches the denouement. I was never bored. The hospital setting even if set in the 1930s still felt modern to me with its staff adhering to stringent administrative protocol and the references to patient by their room number rather than their name. Three of the minor characters are called 301, 302 and 303, for example. This happens all the time in the real world of hospitals no matter how often nurses and residents are told to call a patient by their name. I know since I've worked in hospitals all my life.

What impressed me most of all was that From This Dark Stairway is one of the uncommon examples of a Golden Age detective novel in which the murderer's name is not revealed until the final sentence. This book is well worth seeking out for that tour de force bit of mystery writing alone.
Posted by J F Norris at 7:53 AM