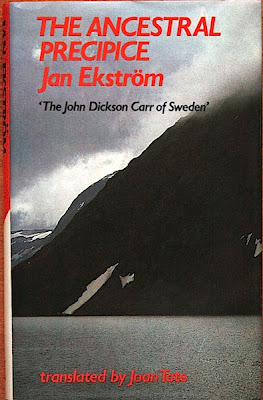 "The John Dickson Carr of Sweden" proclaims the dust jacket of the first UK edition of Ättestupan (1975) translated as The Ancestral Precipice and published nearly ten years later.  Takes a while for the English language speaking world to catch on to a great writer, doesn't it? While there is a baffling locked room murder in this cleverly constructed detective novel its central theme of family secrets and adulterous affairs has more in common with Ross Macdonald than Carr.

Charlotte Lethander, calls to her home her surviving nieces and their families to celebrate her ninetieth birthday. The entire multi-generational family arrives bringing with them plans for blackmail, scheming, adultery and murder. On the very first day of this rocky reunion we learn that the black sheep Victor, a womanizing photographer who likes shooting women nude, has a letter with incriminating information he wants to sell to his father, Martin, and demands 15,000 kronor for its delivery into his hands. Additional avaricious behavior is on display from the nieces, their husbands and children as they vie for the attention of the dying aunt Charlotte. In the midst of all this fawning adulation and scheming a murderer plots a revenge years in the making.

Before the weekend has hardly started Victor and Martin are dead.  It appears to be a murder/suicide. Martin having shot Victor apparently returned to his bedroom, locked his door, and allowed the extinguishing flames in the bedroom fireplace to suffocate him with carbon monoxide. But Martin's children - especially his sharp-witted and sharper tongued daughter Vera - know that the strong-willed man would never submit to Victor's demands and that the suicide has to be a cleverly disguised murder.  But how then did the murderer escape the room? It was locked on the inside. When the police investigate the scene the damper on the flue is open making it seem impossible for Martin to have died from carbon monoxide inhalation. And yet he did.  Further complicating matters is the fact that gun found in Martin's room though recently fired is not the gun used to kill Victor. The case takes an even stranger twist when a second gun is found in the attic with fingerprints of another family member who was thought to have an alibi the night of the deaths.


Hovering over these two crimes is the death of Mauritz Corn's wife, Stella, who accidentally fell to her death and was discovered at the foot of ättestupan, the ancestral precipice of the title. The letter Victor had in his possession revealed the truth about her fatal plunge long believed to be an accident. Aunt Charlotte delivers a jarring description of the foreboding feature of the ättestupan and also the Nordic legend that attaches itself:


Do you know what was here before the house was built, just where we're standing now, I mean? An ancestral precipice. It's been here since Viking days, though I don't suppose any Vikings lived here, you know, only cultivators. Nature is harsh. [...] You know what an ancestral precipice is, Inspector? Some of the old ones threw themselves down the precipice. Others were given help when they asked for it. I wonder if anyone would want to give me help without my asking for it. For an ancient old hag it would be eminently suitable.

Inspector Durrell, in charge of the murder investigation, must not only get to the truth of the curious events surrounding the death of Victor and Martin, but also the mysterious death of Stella now looking more and more like a murder. Will the letter from Victor's blackmail scheme ever be found?  Who does it name as Stella's killer?  Will the killer strike again? 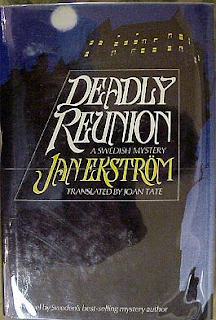 The story is filled with the kind of brooding aura and dark family secrets that fill the pages of the cases of Lew Archer. When I saw the Swedish film version of The Girl with the Dragon Tattoo I also noted the pervading MacDonald-like atmosphere that imbued that film.  I wonder if Stieg Larsson was familiar with the mystery novels of Ekström who appears to have been influenced not only by Carr but by Ross Macdonald.  Fans of Larrson, Carr or Macdonald will find plenty to admire in The Ancestral Precipice, a real puzzler with plenty of twists and a good example of the least likely suspect revealed as the killer in the final pages.

AVAILABILITY:  The book was first published in the US in 1982 under the blase title Deadly Reunion.  Copies of both the UK and the US editions are readily available through the various internet bookselling sties. To date this is the only novel of the popular Swedish writer Jan Ekström that has been translated into English.
Posted by J F Norris at 12:01 PM