Advent Ghosts 2022: A Star, A Star Dancing in the Night 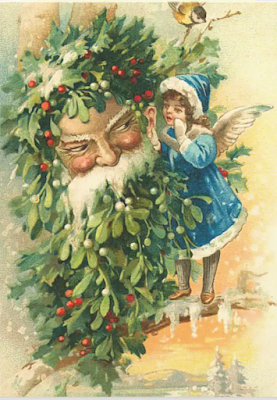 The houses, apartment buildings and yard are ablaze with Chistmas lights and absurd holiday inflatables. It's the dawn of the holiday season and that means it's Advent Ghosts time. Loren Eaton who blogs at I Saw Lightning Fall invites bloggers and creative writers to dabble in a yuletide drabble for his Advent Ghosts celebration. What's a drabble? It's a Flash Fiction Challenge of sorts but with a word limit set at exactly 100. No more, no less.  The only other rule is that we write in homage to the Victorian tradition of telling ghost stories at Christmas time.  Be it old-fashioned, chain rattling specters or more terrifying visions of bloody horror each writer makes up his or her own mind how to interpret that rule.

This year I was inspired by two terms:  fairy lights and chasing lights.

What if they were taken literally?

"A Star, A Star Dancing in the Night" 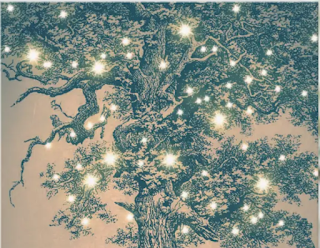 Someone had decorated a Christmas tree with blinding lights in the lot where trees were sold. Reverse vandalism? It’s always something. Better than another stolen baby Jesus.

He’d heard of chasing lights but these were moving. Actually moving, not twinkling or blinking. Moving in and out of the branches, hovering around then plunging in.  One took shape, an arm?  A tiny arm with an even tinier finger beckoned and a chorus of whispers commanded, “Come hither.” And he obeyed. Entranced by the light and succumbed by their glamour he disappeared in the boughs becoming one with them and the light.