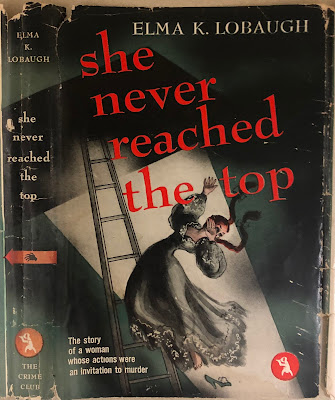 Elma K. Lobaugh's first mystery She Never Reached the Top (1945) was lauded by the editorial team at Doubleday Doran's "Crime Club" as "unusually competent."  But that, my friends, is an understatement like all true raves.  Very few first time popular fiction writers bother with thematic elements in that much maligned genre known as the whodunnit. A murder mystery is often dismissed as a trifle of a book, a mere entertainment as Graham Greene used to categorize his action-filled yet wholly intellectual espionage thrillers. Lobaugh's story is imbued with an soupçon of superstition and other-worldly events that not only add a frisson of terror to the house party haunted by past violent deaths and literally haunted by a ghost but enhance her theme of random violence as an act of chance and fate.  This is a thought-provoking murder mystery, and ultimately a bit of a transgressive novel in how Lobaugh treats her subject matter and how her "detectives" deal with the murder that only they have uncovered -- and then covered up.

Like many of Lobaugh's books this one is set in Indiana and like her later I Am Afraid (reviewed here) the story takes place in a house on the dune-lined shores of of Lake Michigan.  The house itself features prominently and its bizarre unfinished state pays homage to the many weird architectural features of houses in books by John Dickson Carr, Carolyn Wells and Hake Talbot. The house in She Never Reached the Top, as the title may imply, has some missing staircases and incomplete steps leading to the second floor. Years ago a woman fell to her death from one of these unfinished staircases while using the DIY solution, a ladder that had no guardrails on the unexposed side.

Much of She Never Reached the Top seems mired in the past and the death of that unfortunate woman who fell from the ladder infects the house with doom.  Especially as the legend of the ghost has attached to it the prophecy that only those "who have been disappointed in love" will be cursed to hear and see the ghost. Jennie Simpson, our Eberhart inspired narrator, is such a disappointed lover.  She reluctantly accepts an invitation to join the house party after a recent break-up with her boyfriend Peter.  Actually not much is know about why she and Peter are no longer together.  Did he die?  Was he killed in the war?  Did her just dump her for another woman?  We never really find out.  But thoughts of Peter and "what might have been" are never far from Jennie's mind.  And Jennie does hear the sounds of the ghost running to the ladder and the eerie brief silence just before the inevitable thud.  The reader just knows those noises are not a ghost at all but someone who has met the same fate as the woman from the past. But who could it have been?

When in the morning screams are heard and Pam, the youngest member of the house party, comes running into the breakfast room out of breath, in shock, and muttering, "I stepped on her! Oh my God, I stepped on her!" we hve the proof of no ghost and a real corpse. It comes as no surprise that the troublesome wild woman, Margot Spendler, a free spirited, brazenly sexual woman who flirted with everyone including young Pam, was the victim.  But was it only an accident?  Bit by bit Jennie, Skip and Jim find evidence that Margot's death was a cleverly carried out murder. And each time they find evidence one of three either says nothing to the others or destroyys what they find. Will Margot's death be avenged?  Some of the "detectives" think it better to keep it all quiet.  The final chapter is satisfyingly thorough in explaining how the murder was accomplished. And there is a minor surprise in the identity of that killer, but yet the final solution is entirely unconventional in how Lobaugh metes out her version of Justice.

I particularly enjoyed some of the occult sequences like when Jennie is goaded into reading palms.  Lobaugh treats the scene at first like a parlor game, but lets us know that Jennie takes palmistry very seriously, almost as if she is a psychic.  When Margot insists that Jennie look at her palm Jennie is terrified to discover that the flirtatious sexpot has no heart line. Furthermore, that her life line vanishes when it should extend to the wrist.  Could there be any more doom-laden foreshadowing than that?  There are other scenes with superstition and many tales told about the ghost who first fell to her death that add to the fated atmosphere and Lobaugh's theme of lives pre-destined to violence.

She Never Reached the Top is (of course) rather hard to find anywhere. Currently, there are only four copies for sale from online sellers.  I never find Lobaugh's books in stores when I go book hunting.  Adding to the difficulty of locating copies is that it was published only in the US and only in hardcover.  Why it never received a paperback reprint (or even a cheap hardcover reprint from Triangle Books or Grosset & Dunlap) during Lobaugh's lifetime is another mystery that perhaps may never be solved.  It definitely deserved another life outside of the Crime Club edition. I'd say that Elma K. Lobaugh's work is due for a revival.  This is not only "unusually competent," it's rather a brilliant example of the mystery novel that defies categorization and one that dares to break several hallowed rules for a still young genre that too often was entirely formulaic.