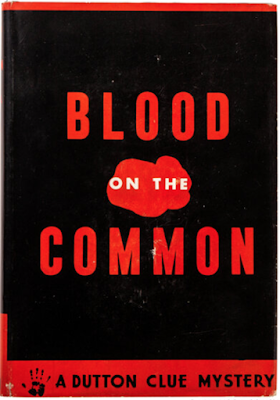 "I got a feeling that I'm goin' to have to arrest one of my neighbors this time, and I never done that. It's hell to be a constable sometimes."

Dan Morgan in Blood on the Common

Small Town, USA.  It's been the setting on thousands of mainstream novels. Placing a story in a small town or village can offer a burgeoning novelist the chance to dissect the stereotypes of Americana by exposing the small-mindedness that usually infects these insular communities.  An outsider enters the town and all hell breaks loose. In their first mystery novel Anne Fuller and Marcus Allen expose not only small-mindedness but the insidious nature of gossip and the havoc it wrecks on the citizens of Small Town, USA.

Interestingly, Blood on the Common (1933) starts with an act of kindness when Pastor Andrew Stevens sees what he believes to be the local town drunk passed out by the Revolutionary War era cannon on the town common.  It's extremely early morning and he figures he'll spare Tug Bailey the embarrassment of being seen yet again as a symbol of alcoholic indigence by rescuing him and taking him somewhere out of sight.  As an afterthought he also is concerned about the dangers of hypothermia and exposure. But really he's most concerned about the townspeople and the ugly rumor mill that will start grinding out gossip if someone sees Tug passed out in plain sight.  He summons the help of Jake Smeed who reluctantly allows himself to be dragged out of his home and together they attempt to move Tug to a safe space indoors. When they move in closer they discover it's not Tug at all.  They have no idea who it is. And he's not drunk. He's dead with a bullet in his chest.

What follows is an intricately constructed detective novel focusing on first the identity of the corpse, why he was killed, and why he was left out in plain view for anyone to stumble across. As the story unfolds we are introduced to nearly everyone in town. Constable Dan Morgan leads the investigation at first unsure of how exactly to deal with the first murder to occur in the town of Welbourne.  He is assisted by undertaker Pete Hill who also acts as the coroner and later by reporter Larry King from the big city. A bit more sophisticated than Dan, Larry is used to asking subtly intrusive questions in order to elicit the right response. Larry has a gentler way compared to Dan's direct brusque approach, but nevertheless is shrewd and insightful in ways that Dan could never be.

Luckily, the team of investigators are given a couple of very handy clues to help with identification -- an engraved pocket watch and an initialed ring that reveal the man is Harvey K. Oliver. Another ring seems to have been removed from the man's left hand leaving a bloody scratch below some age old swelling indicating the ring was probably worn for a long time and never taken off. A wedding band perhaps?

Suspects are numerous of course. But Clara Bisbee, an unrepentant malicious gossip is convinced that Julia Guilford shot Oliver.  She runs to Dan Morgan and reports that she saw Julia leave her house in the middle of the night and didn't return for breakfast.  Clara is Julia's landlady and spends too much time checking up on not only her tenants but everyone in town. Now she says that Julia is in bed suffering from "a cold or pneumonia or something" and that proves she was outside at night in the damp weather for many hours. When Dan questions Julia she is reticent about her activities the night of the murder.  It will be some time before Dan and Larry get Julia to tell all about where she went and who she met late that night.

Meanwhile Geoffrey Wayne, an invalid septuagenarian sits at home mulling over the events as he knows them. He has been visited by Dan's wife Ginevra who often stops in to check on Wayne and read to him.  Wayne is the town eccentric, a collector of antiquarian books, an intellectual at odds with the rest of the townspeople.  Wayne has a marvelous scene where he mocks Clara Bisbee as the local nosy Parker. His verbal assault is both well deserved an d hilarious. The book collector unsurprisingly has a rich and varied vocabulary and his tirades read like some of the best insult exchanges from in a Shakespearean comedy.  Clara of course thinks she's doing everyone an immense favor by being such a busybody but her malicious nature seeps out every time she opens her mouth.  Wayne lets her and many others have it with lines like: "Go pollute the air somewhere else!" And "Hell is too good for you. You're not fit to associate with the residents of hell." And "...you inimitable cross between Judas Iscariot and the Marquis De Sade, you have the temerity to call Tug Bailey the scum of the earth? My dear Mr. Smeed, in comparison with you, Tug Bailey is not only an impeccable gentleman, but an illustrious scholar." In the end Wayne does some sleuthing of his own and is instrumental in providing some of the best evidence to Dan and Larry.  He's an armchair detective of the best type, but with his wheelchair serving as the requisite seat.  Geoffrey Wayne is perhaps the only reason to read Blood on the Common.  While at first Wayne seems to be pompous and cantankerous he proves to be a delightful mixture of sarcastic wit, outrage and wisdom.

Wayne has a housekeeper and cook named Birdie, not too smart and yet another closed-mouth woman unwilling to talk about what she has been up to.  Eventually we learn she's been providing shelter and food for Tug Bailey in a temporary home they've cobbled together in a tool shed out in the back of Wayne's property.  She and Tug have a couple of secrets that will also take Dan and Larry quite some time to uncover.

High on the suspect list is Arthur Shelby, the owner of the only hotel in town.  Oliver was supposedly staying there according to a laundry delivery service but Shelby denies that Oliver was registered at the Inn.  In fact, he denies having any guest for the past couple of days. If that is the case, Dan asks Shelby, then how does he explain a bagful of Oliver's clothes that were to be delivered to the man this morning at the Inn? Typical of almost everyone in Welbourne Shelby remains tight lipped. Who if anyone will be willing to talk to Dan and Larry?

Well, Jake Smeed has a lot say.  Belligerent and volatile Smeed has been at war with Tug Bailey for years. His antipathy for the drunk is well known and openly expressed with hostility. Tug had a farm that everyone in town knows Jake stole from him. When Tug lost his land he lost his soul and it drove him to the bottle. Smeed refuses to call his "business deal," a shady manipulation of real estate law and bribery with a highway construction company, stealing Tug's farm. Dan has theory that Oliver was involved in that "business deal" that bordered on fraud and killed him then framed Tug. Larry is unsure if Jake could be that clever or vindictive. But it certainly looks bad for Jake when Tug goes missing.

There is a second murder, one not too surprising and brought about by the behavior of the victim.  It's a neat twist that complicates the case of Oliver's death. And ultimately it's a daring rule breaker for a traditional detective novel written in the early 1930s.  I thought it gutsy for this first time writing duo to add a unexpected twist to an already rather complex plot. 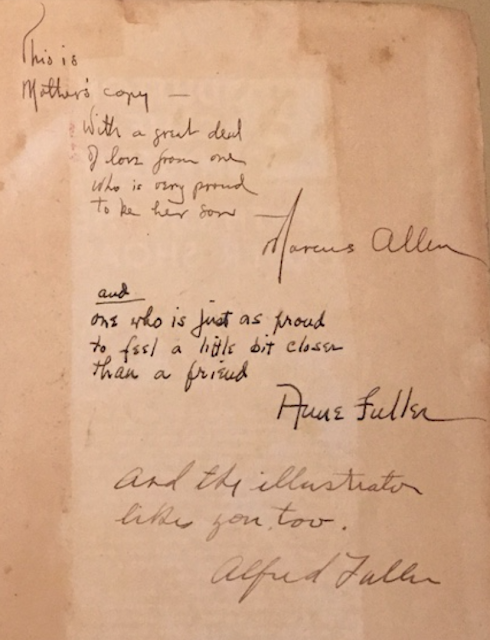 For a mystery novel this shows a real love of the genre, a respect for fair play rules while at the same time flouting them with the second murder.  It's well above average for a detective novel of any era and rather advanced for one in the heyday of the Golden Age, especially from a team of supposed novice writers. Many readers may cavil at the reveal of the villain as it seems rather arbitrary and takes the concept of the least likely suspect to extremes.  Yet all the clues are there pointing to who Fuller & Allen intended to be their murderer from the outset.

Anne Fuller and Marcus Allen wrote only two mystery novels together.  I am sure they were involved in the movie business possibly having contributed to screenplays but I've been unlucky in obtaining any proof.  Despite the fact that I have received many emails from a variety of relatives all saying they are related to Marcus Allen I still have little to offer up about the lives of these two writers. One of these relatives was kind enough to send me a photo (shown above) of an autographed copy of one of their books. So at least we have their signatures and sentiments along with Fuller's husband (or is it brother?) who drew the map in that second novel.

Blood on the Common is much easier to find in used bookstores, but it is Fuller & Allen's Death on the Outer Shoal that is the far superior book of the two.  Both explore small mindedness and insularity in New England villages but the second book adds a thrilling dimension of vigilantism and self-preservation of a community into the mix.