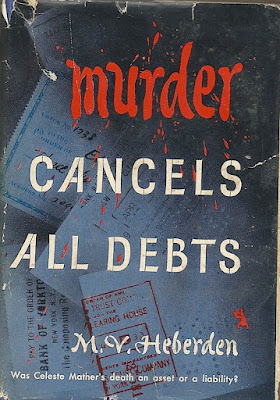 Those who know the many novels of M.V. Heberden are probably more acquainted with Desmond "Des" Shannon, her tough private eye modeled very much on the 1940s movie version of a typical private eye. But she also wrote three books with a much older detective -- war veteran, and former Naval Intelligence Officer Rick Vanner who after his service in the US forces briefly ran his own private detective agency with government contractors as his primary clients. Then he stepped out of that life. But he wasn't to abandon entirely his life as a detective for long. Murder Cancels All Debts (1946) is his first appearance in a novel. Despite its flirting with an awful Alternative Classic style title the mystery is engaging and often original in plotting. Heberden's crisp writing, her sharp ear for quips, and her observations about post-WW2 life in America and the xenophobia that infected the country that make the novel worthy of attention.

The story is almost run-of-the-mill in that we have a unlikable woman as the victim, several unhappy marriages, flagrant adultery, and couple of stock characters. The clueing sometimes falls short of the mark. There is, for instance, a missing dinner napkin that shows up in the pocket of a woman's raincoat and everyone begins to suspect her of the crime. Apparently, we are supposed to infer that it was used by the killer to fire the gun that killed Celeste Mather though this is never outright stated. There were other aspects of the crime that were much more important and telling, but for some reason everyone gets all riled up about the napkin.

The minor flaws in plotting, however, are easy to overlook because the real point of the novel is Heberden's commentary on the treatment of refugees in the US, the differing views of war from European's perspective as opposed to an American's, and her criticism of the complacency of Americans who can so easily mourn a fallen soldier overseas while their country, its citizenry and their homes remain relatively unscathed. She has much to say in the character of Polish pianist Paula Ronosky who constantly reminds the reader that Americans do not understand war at all. This is not just grandstanding on Heberden's part. The immigrants and ex-pats who make up a small portion of the cast turn out to be the most crucial figures in the story. The reader should be playing close attention to Paula's philosophy when she speaks; the behavior of Manuel, the Mexican chauffeur; and the slightly cryptic conversations that Vanner has with Manuel in Spanish (rendered in English, of course). These mystery novels that focus on the outsider or "the other" are always fascinating to me. Heberden's wartime observations seem obvious to us now, but I'm sure she was in the minority among all the flag waving patriots of the era who swallowed up our own self-aggrandizing propaganda and never truly experienced what the true horror of war is about.

Initially I was drawn to her talent for epigrammatic dialogue and a skill in turning out quips. Here's a sample:

"There's nothing in the world more desperate and ruthless than an unmarried woman of thirty. Nothing in trousers is safe within a mile of her."

"Sailors on leave are notorious for their lack of discipline."

She went over to the piano with the feeling that perhaps it would like to be played. Musical instruments should be played as pearls should be worn.

He was too far away to hear the conversation, which annoyed him on the principle that all knowledge in murder cases -- even apparently irrelevant things like other people's telephone conversations -- is useful.

"There are very few moments when the truth is a good idea."

Sympathy, generosity, kindliness [she found everywhere in the U.S.], but no understanding. They still didn't know what war was all about except the few who had been in it and returned. And they seldom talked. Even those with sons and husbands overseas didn't understand. They suffered and they feared, but it seemed to take a European to understand.

In the end I was won over by her flair for the dramatic. There are quiet, deftly done moments like when Delia, a minor servant character, pauses in a doorway to listen to Paula's piano playing and allows herself to be taken away from the madness of the murder investigation if only for a brief instant. But the dominating atmosphere of impeding doom is the masterstroke. The characters are at the mercy of a torrential rainstorm which threatens to cause massive flooding. They flee the scene of the murder and take refuge in the Blane house, next door to the Mather estate on much higher ground. When the dam bursts as they all feared, the river floods the town, washes out a bridge and leaves them all isolated. There follows a power failure and a climax that takes place in the candlelit Blane household where a killer is hiding among the stranded survivors.

Mary Violet Heberden began her life as an actress in England. She then emigrated to the US and found a variety of supporting parts in 13 Broadway productions ranging from Kaufman & Hart's Merrily We Roll Along (an unusual play told in reverse chronology and later adapted into a musical by Sondheim) to the long running drama Victoria Regina starring Helen Hayes as Queen Victoria. Her stage career lasted from 1929 to 1941 and during this period she began writing detective novels. Her first novel, not too surprisingly a theatrical mystery, was Death on the Door Mat published in 1939. Under the pen name "Charles L. Leonard" (the name is a combined tribute to her father a mother) she wrote espionage and adventure thrillers, most of them featuring another military man and war veteran, Paul Kilgerrin, as her series detective.

Heberden had a fondness for travel and lived and worked in South America. At one time she was in charge of a timber company in Brazil. She also traveled extensively in Europe and settled in Rome for a while sometime in the 1950s. Her career as a crime writer seemed to be a secondary source of income but she was prolific, sometimes having four books published in a year, and her writing career lasted close to twenty years. Her final novel was published in 1953. She died in 1965. 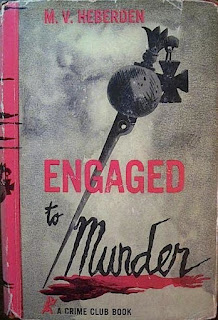 Other than Engaged to Murder (the second in the Rick Vanner series) reissued back in the 1980s most of Heberden's books under her name and as Charles L. Leonard have not been reprinted. The used book market is flooded with a variety of her titles in both US and UK editions, but most of them are the older hardcovers as there were few paperback reprints during her lifetime. I'll be looking at her private eye Desmond Shannon in the coming months and maybe sample one or two of her thrillers as Leonard. Stay tuned.