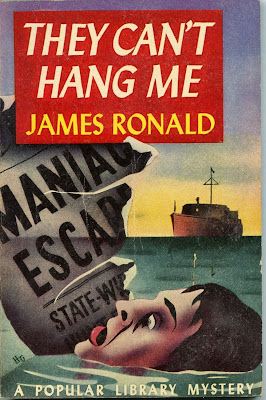 James Ronald received quite a bit of praise with his first few detective novels from writer August Derleth to novelist and book reviewer Harriette Ashbrook all pointing out his ingenuity and freshness.  Of course you have to take this kind of enthusiastic praise with a grain of salt and maybe a dash of sugar, too.  Book hype has been with us for decades though it has skyrocketed in the past 15 years or so with the kind of gimmicky stunts some P.R. people are pulling.  When I learned that Ronald started out as a bargain basement pulp writer for the British digest publisher Garmol who published his early novels sporting such lurid titles as The Green Ghost Murder, The Man Who Made Monsters, and The Sundial Drug Mystery I was very wary of the blurbs Ronald received for his books. Was it just a fluke or did he really rival the kind of clever plots of a John Rhode or Carr?

They Can’t Hang Me (1938), listed in Adey’s Locked Room Murders, also offers the added bonus of an impossible crime. Actually, two impossible crimes. Ronald had a lot to live up to. I’m glad to report that despite his background in pulp digests James Ronald does indeed merit all the praise lavished upon him. They Can’t Hang Me is a corker of a mystery novel. Ingenious murder methods call to mind the brilliant John Rhode; two impossible crimes, one of which is worthy of Carr; and witty dialogue reminiscent of Clifford Witting. All are on colorful display in this page-turner of a story.

The plot is familiar to any crime fiction fan and seems lifted from the cliffhanger serials of the 1930s. Lucius Marplay, an inmate from a mental institution, escapes with the intent of carrying out a plan of murderous revenge, threats of which sent him to the asylum in the first place. Each murder is announced in the obituary section of The Echo, the newspaper where the victims work, on the very day of the death leading the police to believe the killer is hiding out in the building. A thorough search of The Echo building and its environs turns up no one who shouldn’t already be there. Though the police are fairly certain the escaped lunatic is the culprit somehow he manages to elude capture with each baffling crime. The title comes from Marplay's claim that his plan is as close to a perfect crime as one can dream up for even if he is caught he can't be hanged as he has already been declared insane. He will just be thrown back into the asylum.

Perhaps what makes the book work so well is Ronald’s sharp sense of humor. Even amidst the terror Ronald still finds ample opportunity to lighten the tone. The book is very funny with handful of well drawn colorful characters who serve as the author’s comic voice. Some of the best wisecracks come from a scene between Agatha Trimm, the guardian of Joan Marplay, daughter to the escaped lunatic and the offbeat private investigator Alastair McNab. Some of my favorites are:

Agatha Trimm: "Cocoa is a perverted taste for a man. I'd be careful of him, Joan."

Alastair McNab: "There's two things I like naked and whiskey's one of them."

Sir John Digby (a psychiatrist fed up with the Freudian imaginings of his female clients): What he longed to say to them was "What you need is more fat here"--slapping them where a woman should be comfortably rounded-- "and then you'd have less fat here" --smacking them on the head.


The characters, too, are a lively bunch who hold the reader's interest and keep the story moving at brisk pace:

Mark Peters -- managing editor ready to fire anyone whose actions threaten to ruin the already tarnished reputation of his dying newspaper.

The aptly named Ambrose Craven -- an overweight skirt chaser whose cowardice and fear has him fainting in every other chapter.

Flinders -- an ex-reporter gone to seed and drink, who’ll risk his life when he turns to blackmail in order to feed his alcoholic cravings.

Alastair McNab -- the odd and rambunctious private investigator determined to unmask the murderer and sell his story to a rival newspaper.

Agatha Trimm -- guardian to the plucky heroine Joan Marplay. Agatha is a tough as nails, no nonsense woman distrusting of nearly every man Joan sets eyes on.

The detective work is shared by two characters. Joan Marplay who acts a sort of girl sleuth trying to prove her father is not the madman the police and newspapermen think he is. She is sure he was sent to the asylum wrongfully and that his sworn revenge was only a reaction to his furor at being thought mad. Then there is McNab who arrives with a letter in of introduction from the asylum announcing he has been hired to track down the escaped Marplay. With his pronounced Scottish brogue, rendered in a typical 1930s phonetic dialect, and his oddball tastes and habits (like carrying his lunch around in a wicker basket wherever he goes), McNab is the most unusual of the cast. So unusual that he arouses the suspicions of Superintendent Wrenn who has his sergeant investigate McNab's background. McNab is shrewd yet enigmatic. One never knows if he is out for himself or if he really wants to solve the case and apprehend Marplay.

They Can't Hang Me is an excellent example of a crime novel that mixes elements of the detective novel with that of the pulp thriller. So good was this first outing I had to read the other easily accessible crime books of James Ronald. I found some of his later books lean towards psychological crime novels that foreshadow the work of Patricia Highsmith and Julian Symons.
Posted by J F Norris at 10:00 AM