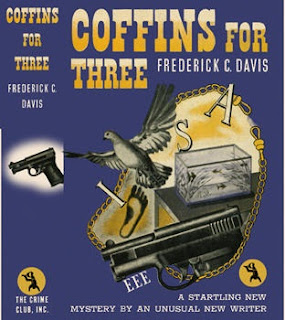 "Joan" enters and approaches table with Cyrus and Delevan. Tells them she's waiting for some who she plans on killing. Wants to appear that she's not alone for safety. When she sees her mark she abruptly leaves ready to carry out her plan.

CUT TO: Man shot down on the front steps of the club. "Joan" is spotted fleeing the crime scene accompanied by a mustached dandy who shoves her into a car. Together they speed away before the police arrive.

There's a cinematic opening for you. It all happens within the first ten pages of Coffins for Three (1938), the debut Crime Club detective novel from Frederick C. Davis. Primarily a prolific pulp magazine fictioneer Davis is best known for his stories featuring Mark Hazzard aka Secret Agent X, Steve Thatcher aka the Moon Man, and various weird menace tales. When he turned to novel writing he created Cyrus Hatch, professor of criminology a Knickerbocker College.  Hatch is partnered with ex-prizefight Danny Delevan who acts as his "bodyguard" and man-of-all-work.  Mark Hatch, Cyrus' father and the police commissioner, sees his son as a kind of tougher version of Philo Vance and thinks he needs a good kick in his pants. Rounding out the cast of series regulars is the ever faithful Jane Porter (no not the same one in the Tarzan stories) but rather Hatch's eager to please secretary who envisions herself an amateur sleuth. 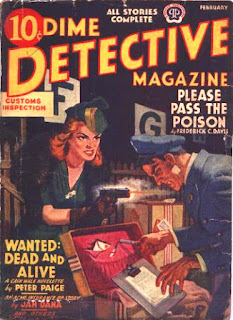 The plot of Coffins for Three is a mix of pulp action, detective fiction and a generous helping of the utterly bizarre. How bizarre? The search for the real identity of "Joan Doe" leads Hatch to the home of fashion model Rhoda Quinn. When he first encounters her she is in her bathtub. She steps out completely nude, reaches for her gun, and trains it on Hatch for the remainder of the scene never once pausing to grab a towel to cover herself. Halfway through the scene Hatch pleads with her to put on a robe so he can concentrate on what she's telling him. Quite a surprise to me. Not the kind of thing you usually find in a Crime Club novel in 1938, that's for sure.

Want more? Characters resort to leaving secret messages relayed via racing pigeons and -- even stranger -- by knocking off bronze letters on a gravestone. One of the murder victims is strangled with a noose. Later in order to prevent suspicion from falling on a certain someone another character disposes of the body. With the noose still around the corpse's neck and the other end tied to the leg of a grand piano the body is tossed out of an apartment window.  A bypasser sees the hanging body suspended in midair and notifies the police. Gruesome indeed. Typical stuff of a pulp writer.

The plot is as convoluted and complex as a Victorian sensation novel. I'll make no attempt to summarize it here, though I made three pages of notes. There are crooked lawyers, forged documents, blackmail, and a dastardly plot that comes right out of The Woman in White. It's a plot lover's smorgasbord. And on top of it all, carrier pigeons! Coffins for Three may have a grisly title but it is an entertaining, fast moving read. 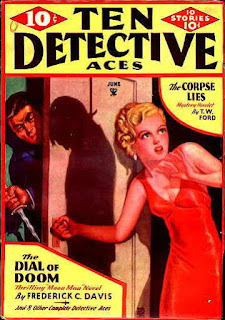 [NOTE FROM THE MANAGEMENT: I attempted to replicate the look and feel of a screenplay in the opening of this post. I know very well it is not correct format nor do I use the proper terminology for camera angles and what not. Please refrain from fault finding.]
Posted by J F Norris at 10:01 AM