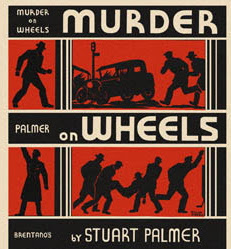 Looks like it's turning into "Author's Second Book Challenge".  Three in a row (Brady, Biggers and now Palmer)  Also the third book in three months with a parrot that swears! And the second book in which the swearing parrot is killed.  What the hell kind of synchronicity is going in my reading selections?  In this one the parrot -- an ancient, ugly, featherless bird -- is the former companion of an ancient pirate who apparently swore up a storm. Onto the mystery…
Opens with a car crash in which the driver is missing.  He is found dead a few blocks north of the crash site, a noose (or more accurately, a lariat) around his neck.  A cab driver claims that the guy was lifted straight up out of the car and flew backwards.  A rodeo happens to be in town.  Anyone can guess how the seemingly puzzling but outlandish murder was done at this point.  The victim also happens to be the identical twin of rich Manhattan playboy Lew Stait.  For purposes of the story they dress in identical clothes.  Can you guess what's going on?  I did.  I found the book slightly amusing but pretty much unoriginal. 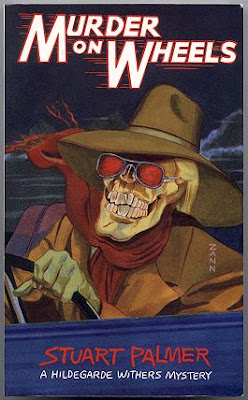 Palmer's books are being reprinted by Rue Morgue Press, but I can see why this one was skipped over.  As much as I am willing to accept the bizarre and the fanciful in murder mysteries of this period I was unwilling to accept the murderer's method.  It's rather preposterous.  In addition to the bizarre murder method which relies heavily on luck and chance, Palmer asks us to believe that a killer would be able by suggestion alone to get someone to do something unnatural and a little bit loony so that his plan could succeed.  I find that part of the story utterly contrived.
Finally, the use of the twin brother motif is unoriginal and cliché.  Any reader well versed in the tricks of the trade will see through the obvious "twist" almost immediately as I did.  I'll try a few more but this one is not recommended.

UPDATE December 1, 2012:  TomCat tells me that Rue Morgue Press has released their edition of Murder on Wheels.  My opinion of the book still stands. But right now I'm chowing down on my words in the second to last paragraph. And I was so looking forward to a blueberry scone.
Posted by J F Norris at 9:59 AM