Advent Ghosts 2019: And Since We Have No Place to Go Each year at this time Loren Eaton who writes at his blog I Saw Lightning Fall invites creative writers to challenge themselves with the micro short story called a drabble. One hundred words -- no more, no less. The only other rules are that each story must have a Christmas theme and must be in the ghost story tradition.  Some take the traditional Victorian road paved with eerie frissons and visited by wispy ghosts, others travel down the darker, bloodier pathways of contemporary horror. My contribution is like a quick trip to the world of Rod Serling style nightmares with a suitably old time Christmas music soundtrack.

In the past they never saw each other at Christmas time. Such a shame. He claimed he hated winter, that he was afraid of snowstorms inevitably altering his travel plans, fearful of missing his much anticipated return flight. How could a son be so ungrateful? But she fixed that, changed his attitude permanently. And now she can see him anytime of the year. For him it would always be winter. One more furious shaking of the snow globe. She smiled wickedly watching miniature tantrums. These were blizzards worthy of dread. Dean Martin’s singing was the added punishment. "Let it snow…!" 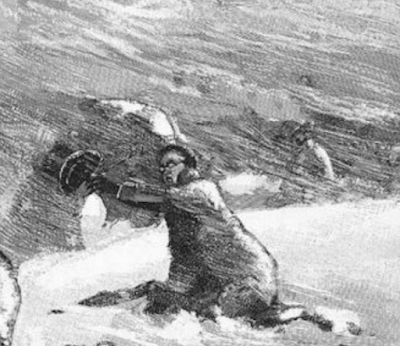